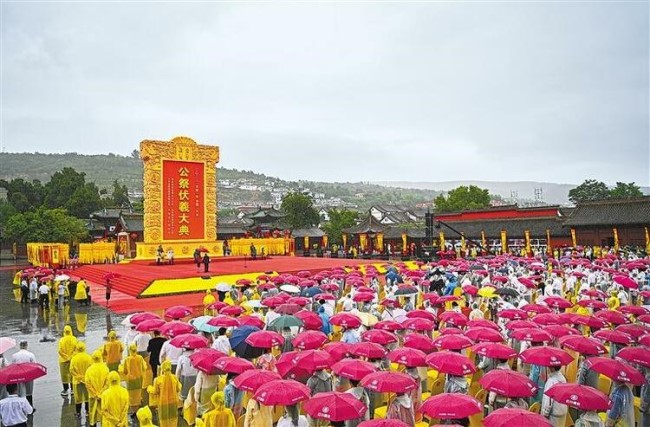 LANZHOU - Fuxi, the legendary ancestor of the Chinese nation, was on Wednesday commemorated by people on both sides of the Taiwan Strait.

At 9:50 am Beijing Time, the ritual kicked off with drum beats at the Fuxi Temple in Tianshui, Northwest China's Gansu province, which is considered to be the ancestor's birthplace. Fuxi is believed to be the inventor of writing, fishing and hunting.

With over 300 worshippers, Fuxi's feats were honored with a dance at the end of the ceremony, after which they left floral tributes at his statue.

At the same time, a similar annual event was held in New Taipei city, marking the ninth year that the legendary figure has been simultaneously commemorated across the Taiwan Strait.

Chien Chien-hua, who came from Taipei to Tianshui to attend the ceremony, said, "The commemoration of Fuxi strengthens the cultural identity of the Chinese nation, and helps more young people learn about the profound Chinese culture."

According to historical records, the commemoration of Fuxi has a history of more than 2,000 years in the Weihe River basin. In 2006, the ceremony was listed as a national intangible cultural heritage by the State Council.

During the memorial ceremony in New Taipei City, Chiang Chi-chen, former chairperson of the Chinese Kuomintang party, said that the commemoration of Fuxi brings more profound cultural communication to people across the Strait.

In view of the impact of COVID-19, livestreaming events and online commemoration platforms were organized to enhance cross-Strait exchanges.