An online lecture featuring Dunhuang grotto art was held on May 15, as part of the Global Linking of Dunhuang Culture to Embassies and Consulates- Chinese Consulate General in Hamburg activity. The event coincided with the 50th anniversary of the establishment of diplomatic relations between China and Germany. 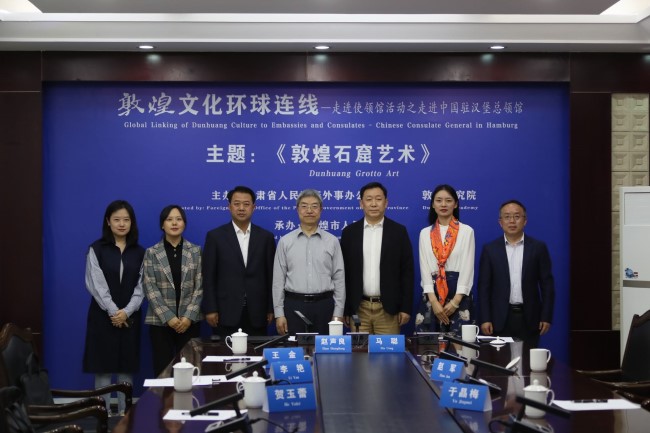 Officials and experts attend the online lecture on Dunhuang grotto art on May 15. [Photo provided to Chinadaily.com.cn]

Zhao Shengliang, secretary of the Party Committee of the Dunhuang Academy, initiated a discussion in grotto excavation, types of caves, styles and themes of murals and painted sculptures. Efforts made by the academy to protect, research and promote Dunhuang culture have also been presented during the lecture.

Wang Wei, acting consul general of the Chinese Consulate General in Hamburg, called for more such activities to arouse people's interest in Dunhuang culture. He expected to see the two sides continue to explore the humanistic spirit and the value of the times contained in Dunhuang culture.

Hamburg has deep roots with China, which could date back to the 18th century. At present, as a transportation hub involved in the Belt and Road Initiative, the city plays an important role in promoting Sino-German and Sino-European cooperation.