Artist in her natural element 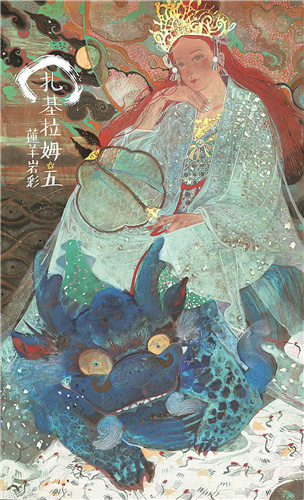 Some mineral color paintings created by artist Wu Yang are inspired by deities and creatures from Chinese mythology, as well as Buddhist sutras. [Photo provided to China Daily]

Wu Yang, a female artist born after 1985 who graduated from the Central Academy of Fine Arts, is introducing a relatively unknown form－mineral color painting.

Her videos recording the creation process of mineral color painting have received millions of views on Chinese social media platforms. Wu has received recognition from young collectors born after 1985, and even the post-1990 generation, and her works are often sold as early as in the draft stage.

Wishing to remind people of the art from the Tang Dynasty (618-907), Wu grinds up minerals to paint deities from Chinese mythology in saturated colors, creating a new style that is both traditional and contemporary.

Wu explains that the mineral color painting could be simply understood as "turning a 1,000-year-old fresco into art on a shelf".

As the pigments, basically minerals and precious stones, are inherently weighty, the canvas has to be supported by a wooden board that is not prone to cracking, yet still malleable, such as cedar. Covering it with the replicated linen paper like that used during the Tang Dynasty, with its thick, absorbent fibers, the canvas is all set.

Once the paper is mounted on the board, which has a light yellow hue, Wu first paints the paper white and grinds shells into powder and lays down a base layer. Then, she grinds the minerals into powder, which she boils into pigment.

Wu claims that creating mineral art is nothing like the painting using normal materials, in which she can simply mix different colored paints to create other shades, because emeralds, for instance, don't work in such a way.

To paint green, Wu applies a thin layer of yellow first and then applies blue on it when it dries; she calls the process "overlaying layers of tulle".

Usually, the canvas gets thicker while she paints－the more mineral material that's added, the more three-dimensional the painting becomes. The layers get even more richly decorated with line carving and gold foil.

Looking at it from different angles and in different lights, the modern mineral color painting shines fully, with sparkle and texture.

The edges and corners of the minerals' coarse grains are visible to the naked eye and, under light, it forms a visually striking surface, like a starry river.

Wu mentions that, if kept correctly without soaking or prolonged exposure to the sun, mineral art can last for hundreds of years. It's a gift of nature which is environmentally friendly.