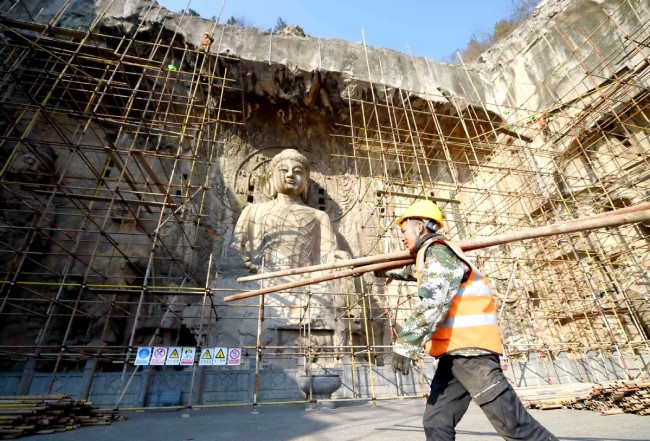 Fengxian Temple, an iconic cave in the renowned Longmen Grottoes in Luoyang, Henan province, is prepared for a major preservation and restoration project on Monday. It is the largest such project in 50 years, as statues in the cave, albeit generally stable, are facing problems including unstable peripheral rocks and water seepage. [Photo by Zhang Yixi for China Daily]

A blueprint to protect and study grotto temples in China during the 14th Five-Year Plan (2021-25) was released by the National Cultural Heritage Administration on Tuesday.

According to the plan, which was drafted last month, a comprehensive catalog of Chinese grotto temples will be released by 2025, along with a database containing detailed information about the sites.

About 1,000 professional conservators for grotto temples are planned to be trained during the period, with security facilities to be established for all such sites in the country.

Grotto temples are religious sites-mainly Buddhist caves or niches-carved into mountains or rocks. They were introduced into China along the ancient Silk Road in the 3rd century, and gradually became a pillar of Chinese Buddhist art in the following millennium.

Prominent examples include UNESCO World Heritage sites such as the Mogao Caves in Dunhuang, Gansu province; the Longmen Grottoes in Luoyang, Henan province; the Yungang Grottoes in Datong, Shanxi province; and the Dazu Rock Carvings in Chongqing.

"In China, grotto temples are widely scattered and demonstrate the inclusiveness of Chinese people and the history of Sino-foreign cultural communication," Li Qun, director of the National Cultural Heritage Administration, said on Tuesday.

"It's significant to enhance protection of grotto temples and fully display their values to promote inheritance of fine Chinese culture and mutual learning among different civilizations."

Since 2012, the central government has allocated about 1.04 billion yuan ($163 million) for the conservation of grotto temples, with another 270 million yuan spent on improving infrastructure related to the grottoes.

Though the effort has greatly benefited protection of the key sites, many medium-sized and small grotto temples still face hazards brought by natural erosion, seeping water, unstable rocks and other "diseases", the new five-year plan said. A lack of conservators also caused bottlenecks for protection.

"Conservation of grotto temples is a systematic project, which demands cooperation among scholars of fine arts, archaeology, materials science, geology, architecture and so on," Li said.

He called for lasting interdisciplinary cooperation and cross-border efforts to protect grotto temples in China.

According to the new plan, frequent exchanges between China and countries linked to the ancient Silk Road will be promoted to share technology and experiences in protection.

It also encourages joint training programs involving leading Chinese institutions on grotto temples and overseas counterparts with rich experience in countries such as the United States, the United Kingdom, Japan and Italy.

Archaeology is highlighted in the plan to achieve in-depth understanding of the timeline of Chinese grotto temples as well as their comparison with other similar sites in Central and South Asia.

Five more archaeological reports on key grotto sites, including Mogao, Longmen and Yungang, are to be completed by 2025.

Separately, 10 more exhibitions on Chinese grotto temples will be organized within the period to better display their values to the public.