On September 24, the opening ceremony and summit of two cultural events were jointly held in Dunhuang, northwest China's Gansu province.

With "Symphony Silk Road, Cultural Expo for All" as its theme, the 5th Silk Road (Dunhuang) International Cultural Expo and the 10th Dunhuang Tour - Silk Road International Tourism Festival (hereinafter referred to the Expo and Festival) aim to showcase Silk Road civilization and promote cultural tourism exchanges through a series of forums, exhibitions, and theatrical performances. 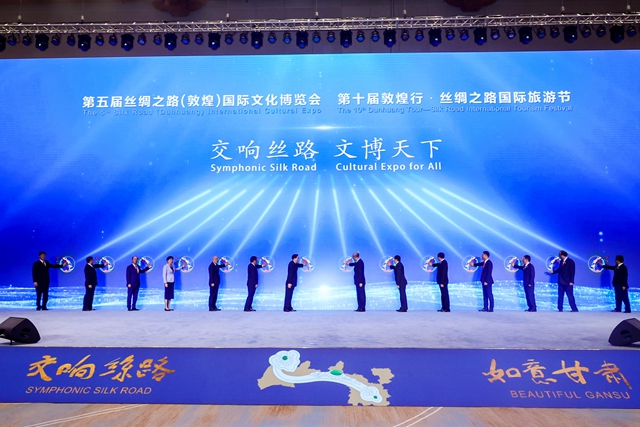 The Expo and Festival were in hybrid onsite and virtual form due to COVID-19 prevention concerns. This year, a delegation from South Korea attended as the honored guest country.

Officials addressed the event include Huang Kunming, a member of the Political Bureau of the CPC Central Committee and head of the Publicity Department of the CPC Central Committee, Yin Hong, secretary of the CPC Gansu Provincial Committee and director of the Standing Committee of the Gansu Provincial People's Government, Zhang Xu, vice minister of Culture and Tourism of the People's Republic of China, Hwang Hee, minister of Culture, Sports, and Tourism of the Republic of Korea, Anatoly Markevich, minister of Culture of the Republic of Belarus, Zhu Shanzhong, executive director of the United Nations World Tourism Organization (UNWTO), Ahmed Eiweida, World Bank global coordinator for cultural heritage and sustainable tourism, and Shahbaz Khan, director of the UNESCO Office in Beijing and the UNESCO Representative to the People's Republic of China.

In his speech, Yin said that the Silk Road has made great contributions to the development and progress in the world. In the eight years since the "Belt and Road" initiative was put forward, it has opened up a new space for economic growth in the world, built a new platform for international trade cooperation and provided a new path for improving the well-being of people of all countries.

"Gansu has been closely connected with the Silk Road since ancient times. The Silk Road extends to all directions from Gansu, and Gansu is famous for the Silk Road", Yin said.

He added that in recent years, Gansu actively seizes the greatest opportunity, gives full play to its advantages as a channel and a hub and cultural advantages, continuously deepens exchanges and cooperation with all regions along the Silk Road, and further promotes policy coordination, infrastructure connectivity, unimpeded trade, financial integration, and closer people-to-people ties.

Zhang said that we should bring into full play the role of the Expo and Festival as a platform, stick to a people-centered development concept in promoting cultural and tourism development, and build more excellent cultural and tourism brands, alongside the planning and implementation of more and better international cooperation projects. Thus, we can improve people's happiness index and make their dreams come true through the high-quality development of culture and tourism.

Hwang congratulated the opening of the Expo on behalf of the Ministry of Culture, Sports and Tourism, Republic of Korea. He said that the Republic of Korea looks forward to seeing coexistence of all cultures of the world and is willing to further promote the cultural exchanges and cooperation based on cutting-edge digital technology and online platforms so as to better pass down cultures.

Markevich said in his speech that China is one of the most important partners of Belarus. The two sides have always been close brothers and maintained sincere cooperation even through difficulties, and they have unfailingly supported each other and provided timely assistance to each other, both in the face of the epidemic and on the international stage.

"Belarus was one of the first countries to support the great initiative to revive the Silk Road. Nowadays, Belarus has become an important fulcrum of 'the Belt and Road Initiative' in Europe and has greatly promoted cultural and people-to-people exchanges", said Markevich.

He expressed his wishes for the new victories to China in the process of building a community of a shared future for mankind.

UNWTO Executive Director Zhu said that "the Belt and Road" cooperation has both created new horizons for China's development and opening-up, and generated new opportunities for all participating countries. The UNWTO has fully recognized China's efforts to promote win-win cooperation between the Initiative's participants.

Eiweida stated that the World Bank's new support to Gansu now is to foster the cultural and creative industries, revitalize historic urban and rural areas of production, create jobs and improve the socioeconomic and living conditions of inhabitants.

Khan, on behalf of the UNESCO, said that for over 30 years, UNESCO has been actively promoting the production and dissemination of research on the cultural and scientific exchanges along the Silk Road, and facilitating diverse dialogue and exchange among countries along the Silk Road.

A total of 298 representatives from Chinese and overseas governments, academic institutions and international organizations attended the event.

During the opening ceremony, a grand theatrical performance "Meeting in Dunhuang" was also staged. 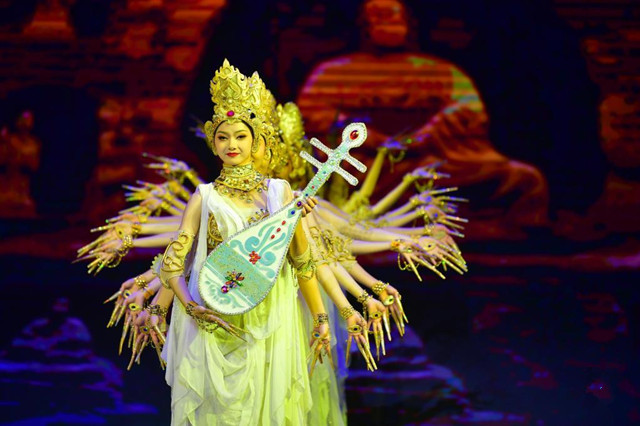 The theatrical performance "Meeting in Dunhuang" is staged during the opening ceremony. [Photo/silkroadexpo.gogansu.com]