Dance manager promotes culture at home and away 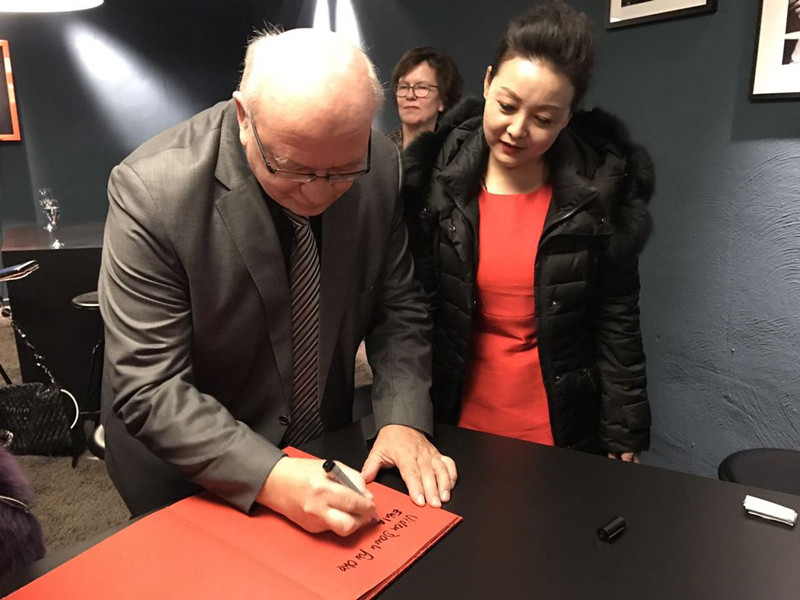 Cheng Hong invites a guest to leave remarks after a performance in Frankfurt, Germany, in 2017. CHINA DAILY

Dancing is not only the career Cheng Hong is passionate about, it is her way of telling Gansu province's story to audiences at home and abroad.

Born in northwest Shaanxi province, the 50-year-old is now deputy general manager of the Lanzhou Grand Theater in Gansu, and has been involved in organizing dance performances for a number of momentous anniversaries over the years.

"I learned to dance in my childhood and I really love it. It's a profession that requires a strong will and faith," she said.

Cheng's hard work has paid off.

In 2018, with a troupe of other performers, she was invited to put on a show of Dameng Dunhuang－a folk dance telling the love story of an artist and the daughter of a general in Dunhuang, inspired by murals in the city's renowned Mogao Grottoes－for the Shanghai Cooperation Organization Qingdao Summit in eastern Shandong province.

The more than 10 days Cheng and her team spent rehearsing were not easy. They were subject to strong winds and sun, as the stage was set up on the city's seafront.

She said that at one point, wind nearly blew their tents into the water, but that didn't stop them. Their show in early June 2018 was a success and earned praise from the nation's leaders and prizes from Shandong province as reward for their efforts.

Because of her professionalism and diligence, Cheng was then selected as a team leader to help organize a performance celebrating the 70th anniversary of the founding of the PRC in 2019.

"I was so excited to be given the mission, and also very proud to be part of the whole performance," she said. Still, it wasn't easy, as Cheng was in charge of a team of 200 dancers.

In early July 2019, Cheng and her team arrived in Beijing to begin two months' practice for the celebration, which was slated for National Day on Oct 1.

"The first problem was accommodation. The team I led had 200 dancers from three different theaters who lived in different hotels, making rehearsal times, even departure times, vary constantly," she said.

Cheng was also responsible for psychological counseling for team members who lost their appetites or had problems sleeping due to the intense schedule and other stresses.

"I arranged meals and made sure they had a balanced diet every day, and I was concerned about their moods and emotions. Whenever they had problems in life or at practice, I would give them advice. It was my job, and I did the work with pleasure," Cheng said.

Thankfully, none of her team members was eliminated from the final list for the show.

In addition to her domestic achievements, Cheng has also made great effort to take performances overseas, to allow foreign audiences to experience the beauty of traditional Chinese culture.

With peers from the Lanzhou Grand Theater, she has performed Dameng Dunhuang in over 50 cities worldwide, generating about 100 million yuan ($15.6 million) from 1,500 performances.

"Dameng Dunhuang is my favorite dance drama that I've been involved in, and I have some sweet memories of our trips overseas," she said. "I remember that when we performed in Germany in 2017, there was an audience member who showed us a photo album of his experiences in Lanzhou after the show."

"He was like an old friend telling us his story in China. It was amazing," she added. "I felt very proud that our culture has won recognition from foreign friends, strengthening my faith to create more Chinese culture dance dramas to stage abroad."

As an activist promoting Chinese culture through dance, Cheng said that every artist can help contribute to people experiencing the beauty of Chinese culture, from friends at home, to audiences abroad.