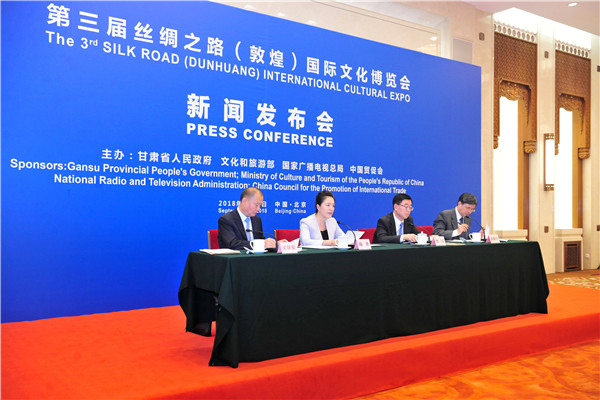 The press conference of the 3rd Silk Road (Dunhuang) International Cultural Expo is held at the Great Hall of the People in Beijing on Sept 13, 2018. [Photo provided to Chinaculture.org]

The Silk Road International Cultural Expo, centering on the appreciation and promotion of Chinese cultural heritage, will bring new highlights to the world.

The year of 2018 marks the fifth anniversary of the Belt and Road Initiative and the third of the expo. With strong support from the central government, this distinguished gathering is scheduled to be held in Dunhuang, Northwest China's Gansu province, on Sept 27 and 28.

With Ukraine as the guest of honor, the event will include around 1,000 guests from nearly 100 countries and regions worldwide.

The five sections of the expo reach national leaders and culture lovers alike. 14 sub-forums discuss major issues of the Belt and Road Initiative such as road construction, relic restoration and cultural industry. 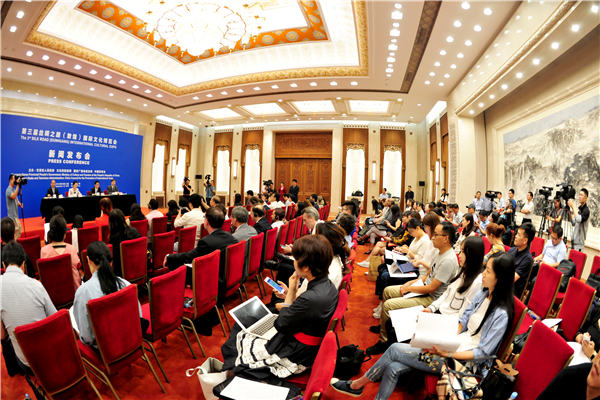 The press conference of the 3rd Silk Road (Dunhuang) International Cultural Expo is held at the Great Hall of the People in Beijing on Sept 13, 2018. [Photo provided to Chinaculture.org]

Meanwhile, new media platforms including WeChat, Sina Weibo and Douyin will broadcast the related activities to a much broader audience.

"The success of the previous two expos has greatly spurred the economic and social development of Gansu," Chen Qing, director-general of the publicity department of the CPC committee of Gansu province, said during the press conference in Beijing this Wednesday. "Now Gansu ranks first in the list of 'Asia's Top Tourist Destinations' in 2017 and stands among the 'Global 52 Must-go Destinations' in 2018."

"Dunhuang, the permanent venue of the cultural expo, has received more than 7.1 million tourists from home and abroad, making it one of the fastest growing tourist reception cities in China."